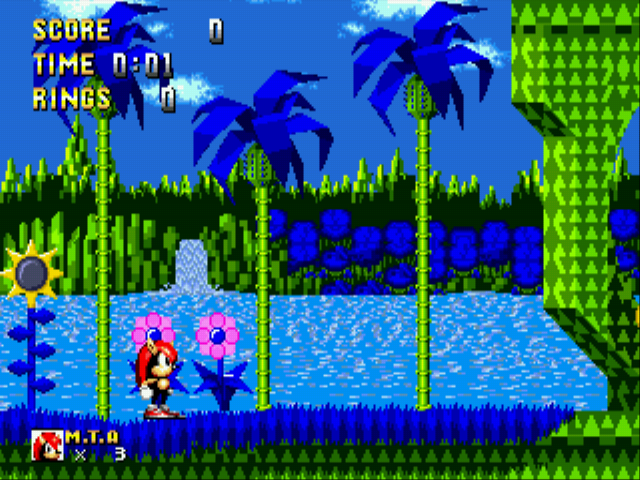 Mighty The Armadillo in Sonic the Hedgehog is a 16-bits classic Game released for the Mega Drive video game console (named Sega Genesis in North America).

Mighty The Armadillo in Sonic the Hedgehog is a platform video game developed by Sonic Team and published by Sega for the Sega Mega Drive/Genesis. First released in North America, Europe, and Australia on June 23, 1991, the game is the first installment in the Mighty The Armadillo in Sonic the Hedgehog series, chronicling the adventures of the titular character in his quest to defeat the series' antagonist Dr. Robotnik. The game's story focuses on Sonic's efforts to stop Dr. Robotnik's plans for world domination, release the animals Dr. Robotnik has trapped, and collect six magical emeralds known as the Chaos Emeralds.

Development of Mighty The Armadillo in Sonic the Hedgehog began in 1990, when Sega ordered its AM8 development team to develop a game featuring a mascot for the company. After a hedgehog was decided on as the main character, the development group was renamed Sonic Team.

In an attempt to steal the six Chaos Emeralds and harness their power, the game's antagonist Dr. Ivo Robotnik ('Dr. Eggman' in the original Japanese release) has trapped the animal inhabitants of South Island in cybernetic shells and metal capsule prisons. The player controls the titular Mighty The Armadillo in Sonic the Hedgehog, who aims to stop Robotnik's plans by freeing his animal friends and collecting all Chaos Emeralds himself.

Mighty The Armadillo in Sonic the Hedgehog plays as a 2D side-scrolling platformer. The gameplay centers around Sonic's ability to run at high speed through levels that include springs, slopes, high falls, and loop-the-loops. The levels are populated with hazards in the form of robots (named 'badniks' in the Western game manuals) that Dr. Robotnik has trapped animals inside; destroying one frees the creature, but is not necessary to complete the game. The player must also avoid touching rows of sharp spikes, falling into bottomless pits, and being crushed by moving walls or platforms, as well as drowning, which can be circumvented by breathing air bubbles periodically released from vents. Sonic's main means of attack is the Spin Attack, in which he curls into a ball and rotates rapidly, damaging enemies and certain obstacles upon collision. This can be performed by jumping in the air or by pressing down on the D-Pad while moving on the ground.

Here you can Play Mighty The Armadillo in Sonic the Hedgehog Online (GENESIS version) for Free in your Browser with no download required from our HTML5, Java Script, Flash Emulator Online on any compatible device!

You are playing Mighty The Armadillo in Sonic the Hedgehog Online, if you like it, please leave your Vote.